How have computers changed the way we work?

Just 30 years ago, hardly anyone had heard of the internet or email. Today, around 3 billion people use the internet across the globe.

Email has permanently changed how we communicate, both in our work and personal lives. It is one of the most revolutionary technologies ever to have been created. But before email, other technologies were developed which also changed our working environments forever; none more so than the computer itself.

Today, the computer is the modern workplace. Almost every profession relies on a computer to some degree to do their work. From online retailers to doctors, nearly everyone uses a computer to record tasks, be it a transaction or patient notes.

So, how and when did technology change the way we work? 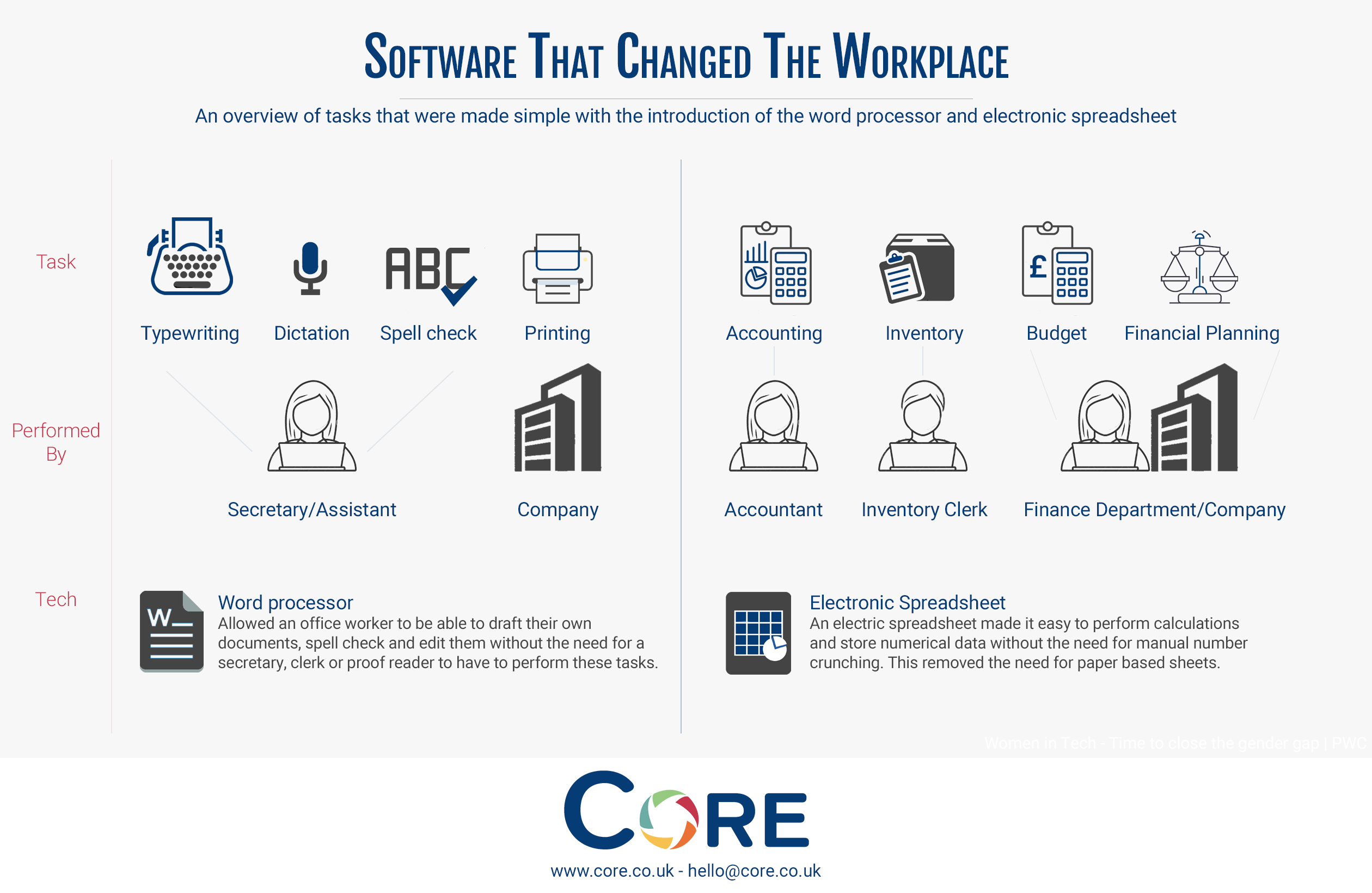 The first computer was developed in London in the 1950s; much earlier than many people think. It performed simple addition and was first used by a bakery. This machine was said to take “the toll” out of adding up, which was appealing to lots of businesses. But the real game-changer came with the launch of word processing software in the late 1960s and early 70s.

Word processing was defined in the early days as a combination of “people, procedures and equipment which transforms ideas into printed communications.” As computers became more mainstream, word processing came to mean the software running on a personal computer, rather than a word processing machine. The first word processor was called the Electric Pencil. It was launched in 1976 and developed by Michael Shrayer, who wanted to use his PC for writing but found that no software existed to enable that.

At this time, almost a third of working women in the United States was in secretarial roles. The word processor was hailed as a feminist invention which would broaden responsibilities and the tasks women in these roles could perform. But for others, the word processor and computer would put their jobs in a precarious position, because technology could now do some of the tasks that people had previously done themselves.

Some of the roles that were most impacted by the arrival of the word processor were secretaries, accountants and clerks, whose roles involved typing, data processing and number crunching.

Computing and the finance industry

The finance equivalent of the word processor was VisiCalc. Short for ‘visible calculator’, VisiCalc was created in the late 1970s and was the first computer spreadsheet; a precursor to Excel, if you will. It could recalculate entire lines of sums by changing only one number and sold more than 700,00 copies in six years.

It did have its limitations, though, which meant competitors could copy some aspects of the software but add their own, more sophisticated elements. One of these competitors was Lotus 1-2-3.

When Lotus 1-2-3 arrived in 1983, sales of VisiCalc dropped massively. Lotus seized the chance to buy VisiCalc in 1985 and quickly stopped selling the product so that they dominated the market.

The computer and computer software have changed the things we can do in the workplace and the way we work. Business has been transformed by the computer, and as new technologies are developed that enhance and increase its capabilities, it will continue to do so.

View timeline of the software that changed the workplace

5 steps to maximise the security of your home router